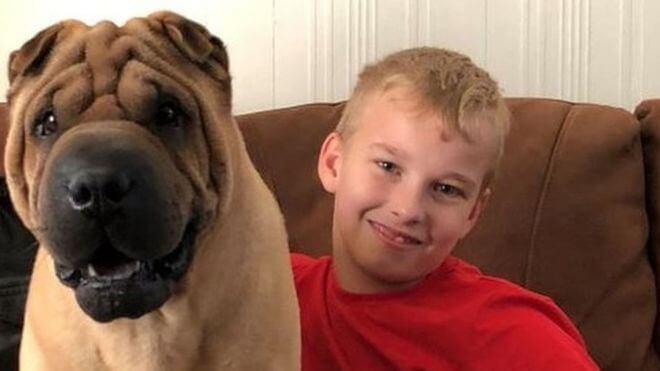 An "overjoyed" family were reunited with their lost dog more than two years after he was suspected of being stolen.
Nicola Spragg, 34, from Bloxwich, Walsall, said her Shar-Pei disappeared without a trace from her back garden in April 2017.
Last week Mata, aged four, was found wandering the streets 25 miles away in Telford, Shropshire. He was traced back to her through his microchip. Ms Spragg said son Frazer, 11, "sobbed" when he realised the pet had returned. Mata, named after Frazer's favourite Manchester United player Juan Mata, had been with the family since he was a puppy. Last Thursday Ms Spragg received a phone call "out of the blue" from staff at a dogs' home in Telford asking if she wanted her dog back.
"My son came home and I told him to shut his eyes," the mother of three said. "He opened them and looked at me and started stroking the dog and said 'it's not Mata'.
"I said 'bab, it's Mata'. He sobbed. It's a lot to take in. "He's not just a dog he's our family." She said Mata was in immaculate condition when he was found. "I do thank whoever had him. I know they are going to be heartbroken, but he's with the rightful owner," she added. Marty Burrell, the co-owner of Hilbrae Rescue Kennels, which helped rescue the dog, said the "lovely outcome" was down to the microchip.
"All we want to do is reunite dogs and their owners as quickly as possible," she said.